Membership into the Gas Processing Association provides substantial value to our members.  From discounted event pricing to access to a strong network of gas professionals, joining GPAC is an excellent decision

Join the ranks of your fellow gas professionals with your membership to the Gas Processing Association of Canada.  The return on investment is extraordinary!

For a downloadable form to complete and mail in, please click here

The Student GPAC Membership Process can be viewed here

The purpose of G.A.S. is to provide a focal point for the alumni of the CGPA, CGPSA and GPAC organizations, provide advice and guidance to the directors and members, maintain contact with all interested past members, maintain and update a current mailing list for GAS Alumni membership; and have a representative attend the GPAC Board meetings to provide appropriate input.

*Past Presidents of CGPA, CGPSA or GPAC are automatically eligible and do not have to satisfy the age or experience criteria, but do need to be retired, or no longer in full time employment and must indicate if they wish to be on the G.A.S. list.

To sign up please provide contact information including email (if applicable) via e-mail to the G.A.S. representative below showing you have the above requirements:

The Award of Outstanding Achievement is awarded each year to a worthy recipient, in recognition of innovation and/or performance within the gas processing and gas liquids industry. Selection of the outstanding recipient is typically done in time for presentation at the Annual General Meeting each year. 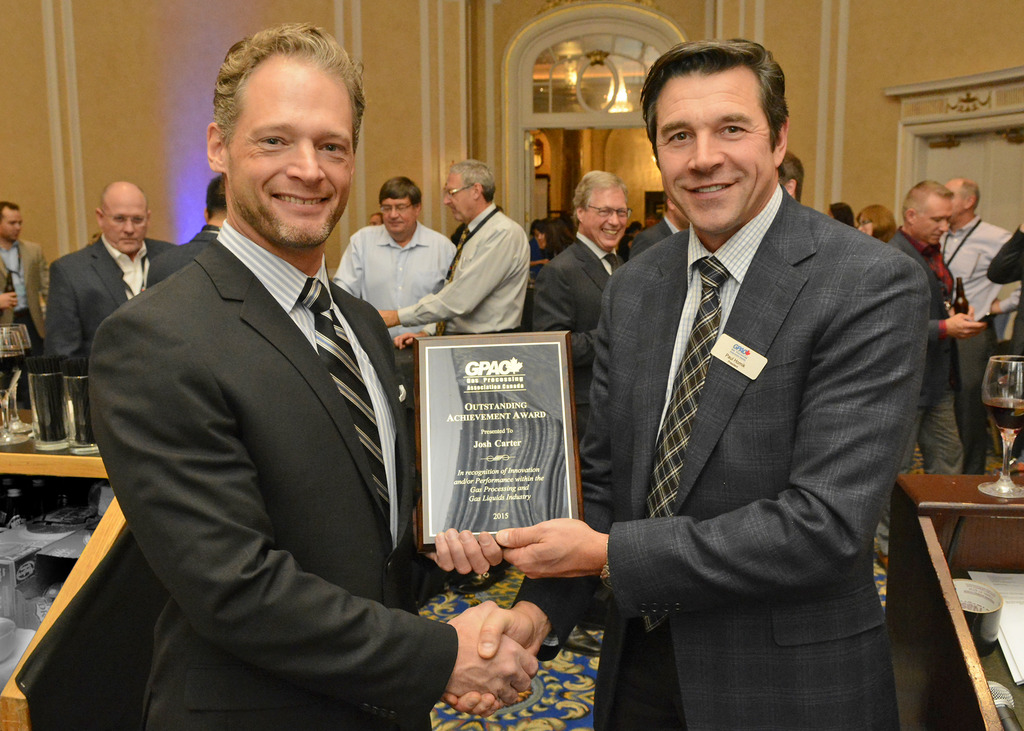 Josh acted as a GPAC Director, President and Past President for over ten years. He never wavered in his attitude, commitment or leadership, through some tumultuous times for the association and the industry.

Some notable projects he was involved with during his Calgary career include:

At Aux Sable he was Sr. Business Development for Canada and generated the first independent liquids incentive deal.  On to Zedi, he was Director of Production and Data, managing Zedi’s largest business unit, covering Scada monitoring, software, asset management, measurement compliance & charts in Canada and the US.

Finally, at CNRL he led production in the Wembley team, and managed almost 15,000boe/d, including multiple units, with production through multiple batteries and processing plants.

Josh volunteered extensively with industry associations like the Petroleum Joint Venture Association – 7 years and on the Gas Processing Association Canada for 10 years, 3 of which were as President.

He currently lives in Houston, Texas with his wife Linda and daughter Lauren, working with Virtual Materials Group.

A member of the Board of Directors since GPAC’s inception in 2005, Al was also a Board member of the Canadian Gas Processors Suppliers Association (CGPSA), a GPAC predecessor. In accepting the Presidency of GPAC, he said, “It was a great honour and privilege.” His goal for GPAC was to continue the momentum to be a relevant and leading-edge organization.

Mr. Niven’s first career was as a respiratory technologist, but he later spent three decades in sales and marketing in the oil and gas industry, most recently with Benchmark Instrumentation.

John worked as an engineer at the Rimbey gas plant (operated by British American Gulf Canada) in the 60’s. When he was transferred to the Calgary office he worked in the gas unit until he moved to Husky Oil.

In the course of his substantial career, Russ has demonstrated exceptional leadership in the areas of vision, best practices, leadership excellence and attitude. Russ was a strong supporter of CGPA in the past, and continues to have his heart in the current organization.

During his three decades of experience in the gas processing industry, Russ has positively affected the careers of dozens of engineers and managed one of the best Facility Engineering Groups in Western Canada.

Russ is described as a “modest, humble man who never sought attention… his authority and rank has been developed on his natural leadership skills and technical competencies, best validated by speaking to the number of current industry leaders that he mentored. He strives to live the principles of engineering – integrity, professionalism, morality. Do the right thing at the right time. He is admired and respected by all who have worked for and with him.”

John was President of CGPA in 1975 and is now retired, organizing hiking activities for other retirees who were also CGPA and CGPSA members at one time.

The following nomination process has been established for selection and award of GPAC’s Achievement Award. The award will be made only through this nomination and selection process, which has been approved by the GPAC Board of Directors (“BOD”). Mr. Coady was born and raised in Cardston, Alberta and attended the Colorado School of Mines, earning a Professional degree in Chemical Engineering, with a Petroleum Refining Option. Mr. Coady started his engineering career in Calgary, Alberta as a process engineer with Shell Canada specializing in natural gas processing plant design. Employment then followed with Petrofina Canada also in Calgary where Mr. Coady undertook assignments in Project Management and became a Plant Manager at a major Gas Processing Plant. Having this type of experience allowed Mr. Coady to found Delta Projects in 1966. At the time of its founding, Delta was the first Calgary headquartered company to provide engineering, procurement and construction services to the hydrocarbon processing industry in Western Canada.

Through Mr. Coady’s leadership as President of Delta, the company’s controlling ownership was secured by employees and the company thrived by developing its engineering and project management expertise. In a series of acquisitions from 1986 to 1989 Delta Projects expanded into contract maintenance, tool rentals and direct hire construction as well as construction management. The company’s name was changed to Delta Catalytic Corporation. Mr. Coady was Chairman & CEO of this company for ten years and the company grew in revenues to over $700 million annually with operations throughout Canada, US, UK, and the Middle East.

In 1995 the company was acquired by McDermott International Inc. and Mr. Coady retired in 1997 having participated directly in the development of the Canadian natural gas processing and petrochemical industries during his 43 years in engineering and construction.

Mr. Coady is a Professional Engineer and was recognized by APEGGA in 1988 with the Centennial Award, the Association’s highest honor. He was also honored by the Colorado School of Mines in 1993 with their Distinguished Achievement Medal. Mr. Kowalchuk was involved in starting the GPAC organization in 1959 and is currently sitting on our GPAC board representing GPAC Alumni members. He was born and raised on a farm about 10 miles northwest and across the Athabasca River from the town of Athabasca. Art worked on the family farm until 1946 and graduated from the University of Alberta in 1950 with a Bachelor of Science degree in Mining Engineering.

Art joined the Canadian Gas Processor supplier association in 1959-60 as Treasurer serving for a number of years and then took over as Secretary for many years. He also presented papers on gas processing at various technical sessions.

Art retired from Gulf Canada Resources in 1986 after 37 years of service and his wife passed away in 1999 after 50 years of marriage.